San Diego History Project: What can change in a lifetime?

Our students will be taking on the role of historians as they learn about the important people and events that helped shape the beautiful city we call home. We began the project with talking about change and how things are very different from when their grandparents were young. They were shown a car commercial and we discussed all of the elements of change that were present in the video.
In preparation for an interview of a local community member, they learned about the interview process. We discussed what kinds of questions (specific vs. open ended)made for a better interview. They prepared which questions they wanted to ask our interviewee, and then synthesized what they learned on a graphic organizer.
The students learned about San Diego's history by going out into the community and experiencing it. They traveled back in time as they visited Mission Trails, the San Diego Mission, Old Town, and the USS Midway.
For their final product, the students created a card game called Timeline San Diego. They each created their own card depicting an important event in San Diego history. Copies of this game were donated to the San Diego History Center for the students who participate in the School in the Park Program.

The Dia de los Muertos project exposes the students to a holiday that is rich in culture and tradition. Students are able to take a peek inside a celebration that has some similarities, but many differences to our traditional Halloween.
Students collaborated with Ms. Kirti's 5th graders to read articles about the history, traditions, food, and folk art of the holiday. The collaboration culminated with collaborative art piece. 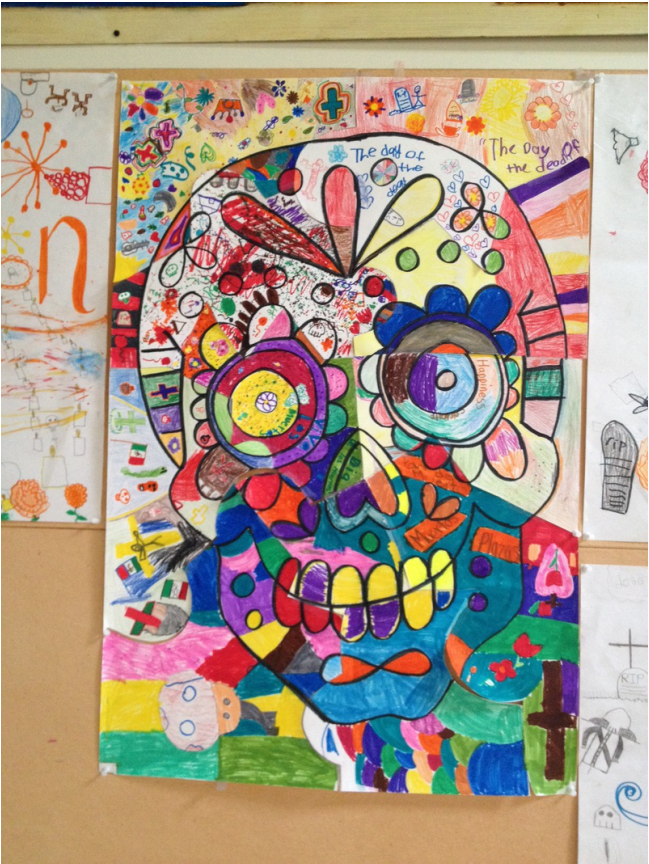 The third graders then studied ofrendas a little closer. They learned what they were, why people set them up, the items that are traditionally included, and their significance. We are designing our own class ofrenda that will be exhibited on Oct. 30th.

For our first project, entitled "Collective Culture," the students are exploring the personal traits the help create a safe, rich, and nurturing classroom environment. They will create a 3-D collage that represents them and all the traits they bring to the table.
We began by reading Molly Lou Melon and analyzing her character. Then the students compared their personal characteristics with a partner and created a venn diagram.  They also brainstormed what they felt was important to them, what they are an expert at, how they care for others, and what makes them successful at projects. Exhibition of the Collective Culture will be on Back to School Night, Sept. 11.
We talked about what the words "Collective Culture" mean, and how we are creating such a thing in our classroom. We watched a short film called "Elmer's Nest" and discussed how the film represents us in a way. We are like little birds, each bringing something individual and unique to the makeup of the classroom. The students began building their bird houses this week. Thank you to all the parents who have helped!